NickTimiraos from the Wall Street Journal

Today “Miss Housing is in Nirvana 2013”  and “Housing Nirvana is around the corner 2014” finally threw in the towel with existing home sales, revising them not only for this year but out to 2016.  Recently, I wrote an article stating that if mortgage purchase applications don’t make an epic rise in the month of March,  then revisions lower will have to be made for total sales). https://loganmohtashami.com/2014/02/20/mortgage-purchase-applications-running-out-of-time/

Money doesn’t grow on trees and home buyers don’t have 100% stated income financing anymore. The charts below from Professor Anthony Sanders shows that we simply don’t have the year over year demand to have growth for existing home sales from mortgage buyers. Cash buyer total volume isn’t strong either. This with rates at 4.5% and inventory rising 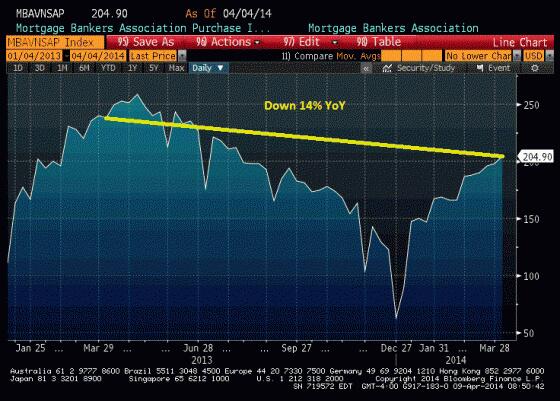 Does this mean housing in a collapse?  No, it just means that until we get wage growth and better jobs into the economy the housing market for existing home sales will be soft.  For new home sales it’s a different market place because it doesn’t really represent main street America. So that market will have growth in sales in 2014. However, that is more a by-product of coming off an 80% correction from the peak  in  new homes sales which  are only 1/10th of sales now.   Traditionally this  would be 1/6th  of the market.

Existing home sales are more representative of main street America, not including the 35%  of the market who were cash buyers last month.  Until we see growth in American wages and overall employment, the market will remain soft. Another aspect is that the first time home buyer and move up buyer has to deal with all this housing inflation we have seen since April of 2012. When prices and rates rise together it creates a dynamic duo of pain for buyers.

As Professor Sanders shows here in this chart which goes to my very first economic thesis about housing back in 2010, “We simply don’t have enough qualified home buyers, excluding cash buyers to have a strong primary resident housing market” If the cash buyers weren’t around in this cycle the weakness would be more evident but for now they’re 1/3rd of the market place 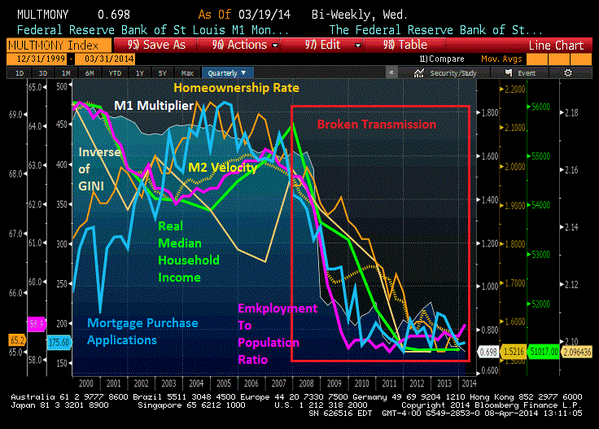 Logan Mohtashami is a senior loan officer at AMC Lending Group, which has been providing mortgage services for California residents since 1988. Logan is also a financial contributor for Benzinga.com and contributor for Businessinsider.com