What’s up with the Home Builders?

You may remember this statement from my  2015 Housing Prediction Article:

“You get my drift: The bar for housing is so low that some housing bulls might try the predictable tactic of bellowing about exponential growth portending a miraculous recovery when all that is occurring is a bump up from a pitifully low base. I take a more measured (or perhaps jaundiced) view of what the future holds.”

And last June on CNBC, I tried my best to present a cautious view of the Builders in terms value, when they were falling short of their sales expectations.

You will see my statement starting at time 2.21 on the video.

If you look at all my new home sales, start and permit predictions over the years, I have always said housing has legs. We had an 82% correction from peak to bottom in sales and starts, and permits crashed as well.

This housing cycle is expanding from the lowest sales we will ever see in our lifetime.

The same can be said about housing starts and permits.
From Doug Short
http://www.advisorperspectives.com/dshort/updates/Housing-Permits-and-Starts

We can expect housing to have slow and steady growth for years from such a low. But that is not what we hear from those who have a vested interest in housing growth.  Instead, we have seen sensational headlines and hype.

Haven’t made it to that corner yet, I guess.

But our friend Ivy is not the only delusionally optimistic housing pundit.  In  2015

“10 reasons the housing market could go ballistic this spring.”    Oops!

Despite these calls, XHB and a lot of builders have been struck as has the entire stock market.

Last summer, I raised the alarm bell once again that the housing story was being overhyped. You may have seen some of my many stating that new home sales were decelerating in their rate of growth, and revisions were coming in negative.

The pundits, economists, and analysts (Ivy Zelman, Janet Yellen, and others) all say the same thing: Housing is so affordable.

But, if Housing is so affordable, then why do we have this data line showing, with the lowest interest rate curve post-WWII, we still have the worst demand for existing homes on record.  And new homes are much more expensive. 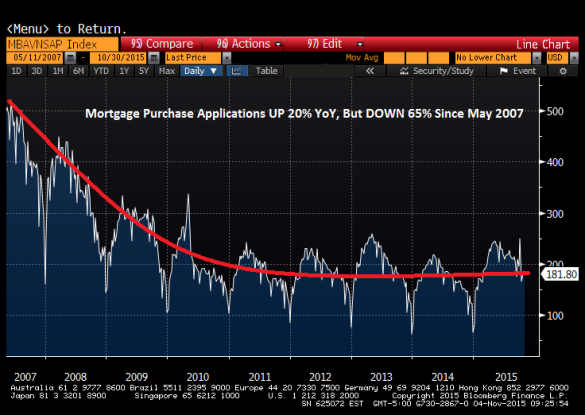 The clear picture below that the bigger home construction model from the builders this century has created an affordability issue for new homes in this cycle. 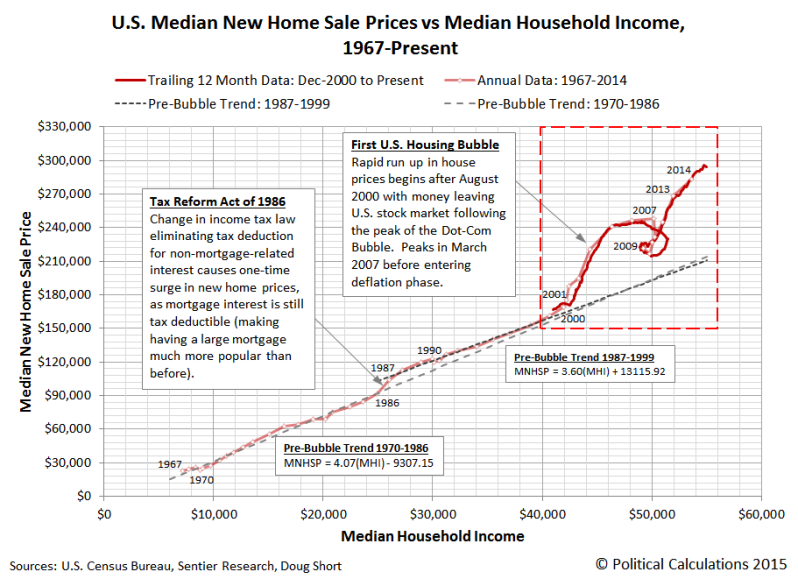 Keep in mind that the affordability index used by nearly everyone is terribly flawed. It assumes all Americans have 20% down, starting debt to income ratio of 25% and no credit card revolving debt. Does that seem to you to be a realistic expectation for our average American?   This is why we haven’t seen Nirvana in new homes.

New home sales numbers are coming out this week, and I expect we ill end the year off with double-digit growth —  but it will be the 3rd year new home sales missed their expectations.

I predicted 8%-12% growth in 2015 with upside if median sales priced cooled because that would imply that there were less expensive homes in the market place.

On the upside, the housing market isn’t falling apart.  It’s still at recession levels, so it’s not going to go lower. With 153 million-plus working Americans out of 322 million total Americans, we are fighting hard to get  500K new home sales in year 7 of the economic cycle with 3.625% -4.125% rates. Yikes.  If you don’t have a boom, you can’t really have a bust.

Housing has legs, but it’s slow and steady, No Nirvana or Ballistic Growth. Today is a much better entry point in the XHB and a lot of builders than last year. XHB is back to 2013 levels as we speak today.

Discipline, discipline, and more discipline is needed from the housing community and a lot less hype.

Logan Mohtashami is a senior loan officer at AMC Lending Group,  which has been providing mortgage services for California residents since 1988 and is in a partnership with ZeneHome.com