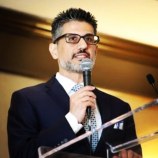 Now that Labor Day has passed, I thought it would be a good time to review the data on the U.S. job market. Also, this is to remind the American bears how wrong they have been about our country and this economic cycle.

Civilian Employment:  While there is debate on the actual total number of Americans working, if we look to the data trends, it is safe to say that we have over 153,000,000 Americans working today.

The BLS interactive site has some useful tools to track jobs by sector.

For those who have followed my work on my Facebook page, I’ve talked about the job openings labor turnover survey a lot.  In the last month the survey  almost hit my target of 6,210,000 job openings.  If we see this number continue to expand without an increase in wage gains and the quit percentage then that would be a concerning issue for myself. 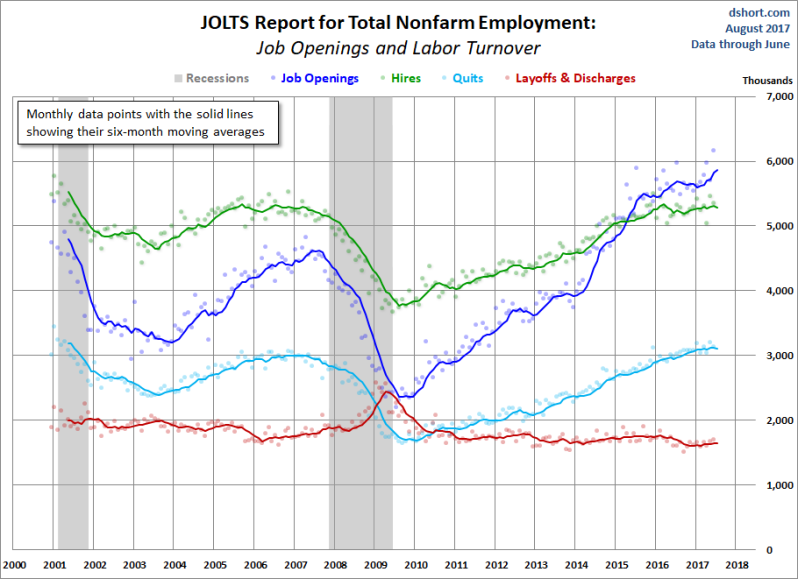 This article has more details and charts on the job openings report:

Mama don’t let your children read Zero Hedge or Shadow Stats.  No matter how much data there is showing that more people have full time employment then part-time employment, we can’t seem to shut up the nonsense coming from the America bears.

In this cycle the lowest percentage of full to part time workers was 79.9% full time and 20.1% part time. 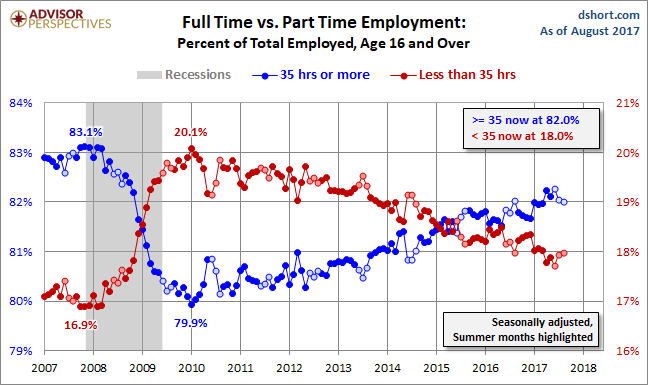 If you look at prime age labor force workers only, then over 88% of workers are full time. But this doesn’t get discussed much because that would ruin the American bears and Russian Trolls pity party. 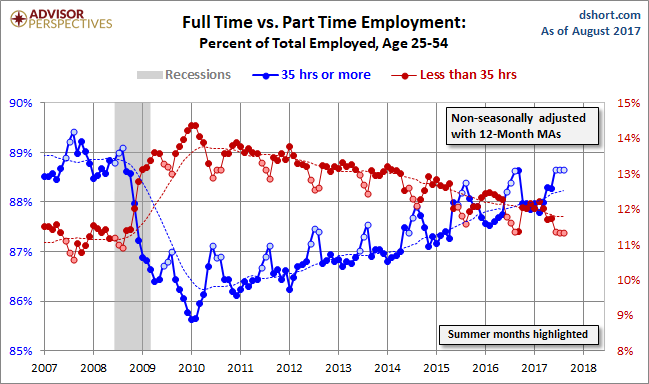 Two thirds of our labor force has some or completed their college education.

The number of high school dropouts is at a cycle low unemployment rate of 6.0%.

The unemployment rate  for college educated Americans never went above 5% in this cycle and are at 2.4% today.

The BLS interactive charts show more of this data.

U6 Unemployment rate is currently 8.6%. It could go lower since the natural floor is around 8%. 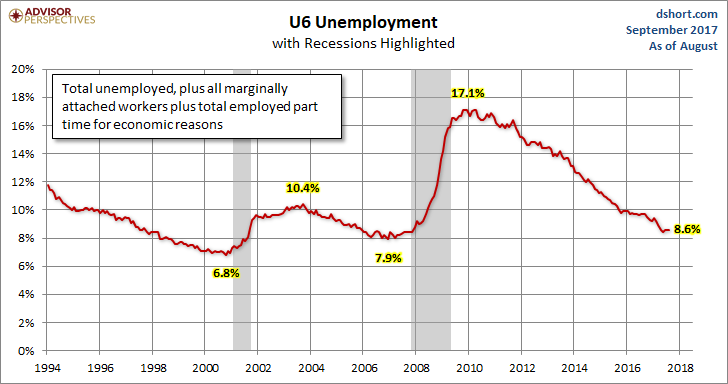 Blacks and Hispanics still suffer from higher unemployment compared to other ethnic groups.  Among whites drug addiction is a factor in unemployment, not only resulting in many deaths but rendering prospective employees unable to pass drug tests. Needless to say,  As a country we still have a lot work to do to address these social factors. We can do a better job in assisting in child care too, so some women can feel comfortable in coming back to the workforce. In some cases that is a wage factor vs child care cost equation. However, most Americans who want to workare working.  Period.

6.  By far this is the longest job expansion on record

83… As in 83 consecutive months of jobs growth, by far the longest streak in history. #payrolls 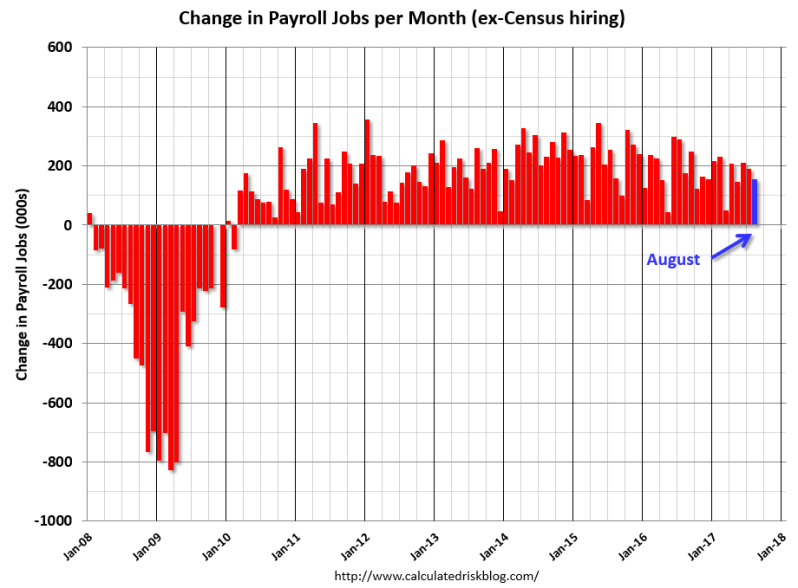 Since 2014, I have lowered my monthly job creation estimates due to labor force growth realities.  These lower estimates have been the right call so far. For 2017 I estimated  140K-170K jobs being created. So far, we are running at 176K new jobs per month, so we are doing a tad better than I expected but these numbers are still slightly lower than the average print for 2016.

However, the one advantage America has over some developed countries is a massive young work force.  The age group 21-27 is the biggest in America today. This means we will have replacement workers for the older Americans that leave the workforce in the coming decades. 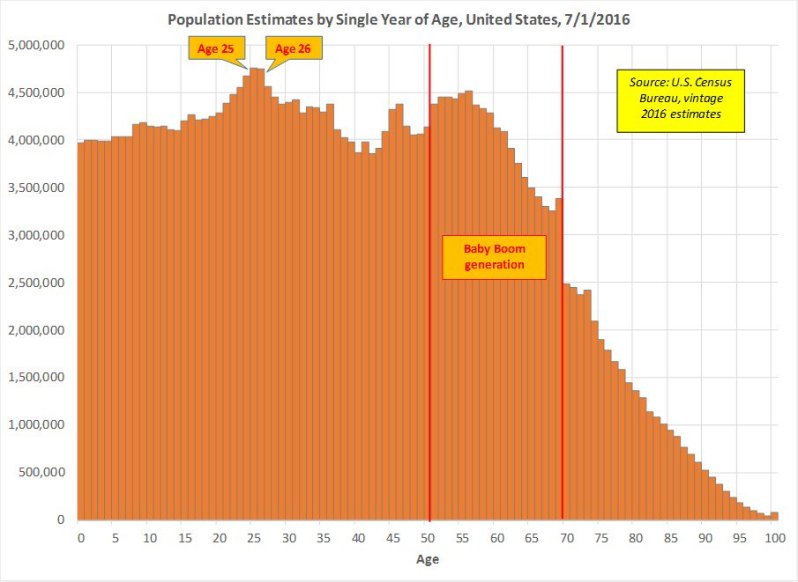 These positive demographics mean this cycle will likely make economic history. If we continue the economic expansion into mid-2019, then we will have the longest job expansion and economic cycle expansion in the same cycle with the largest job openings prints ever in U.S. history. Not too bad for a country that is supposed to be on a verge of a economic crash every three weeks (according to  the aforementioned sources). 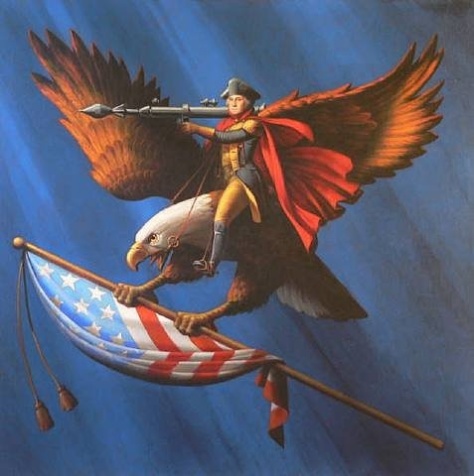