One of the questions I have been getting a lot lately, what are your six recession flags showing now?

First, for those who don’t know what I am talking about. I have been very constant on the economic expansion for years now. I truly believe the American bears not only don’t have economic models to forecast as a recession, but the majority of them are just marketing for clicks and trolling people as a sport.  It’s more interesting to see this action now while we are closing in on our 11th year of the expansion.

However, to give a short recap of the 6 recession flags.

This is a no brainer, when we were down to zero interest rate policy, pretty much you needed the Fed rate hike cycle to start, which means the Fed felt comfortable with hiking rates. A lot of discussions lately, which I believe is healthy for our economic discourse, is whether the Fed should have raised rates as much with Quaninative tightening. Since August 16, 2015, I have brought this discussion up in many articles. However, more recently, I have written that the notion that the Fed is too tight now, with 2 rate cuts and the market still looking for a third, is silly.

More on that here: The Fed Being Too Tight Now Is Just Silly

I can understand why some Recession bears would have called for a double-dip recession with ZIRP in play, but I never agreed with their reasons why.

As you can see below, it’s rare to have double-digit unemployment rates in a recession, it has only happened twice post WWII. Still, last time this happened, we did see a 5% + decrease in the unemployment rate before the next recession occurred. I do understand that labor participation and demographics play a part in this, but I didn’t want to check this flag off until we got to 4.9%. A lot of terrible economic takes in this cycle was also based on this notion that a vast amount of Americans have sat home looking for work, not only since 2010 but going back to 1945. If you were using labor participation rates as a recessionary thesis. Or a hypothesis that a mass amount of Americans could not find any work since 2010 and still have not been able to find one single job in almost 10 years, your thesis is failing you badly. 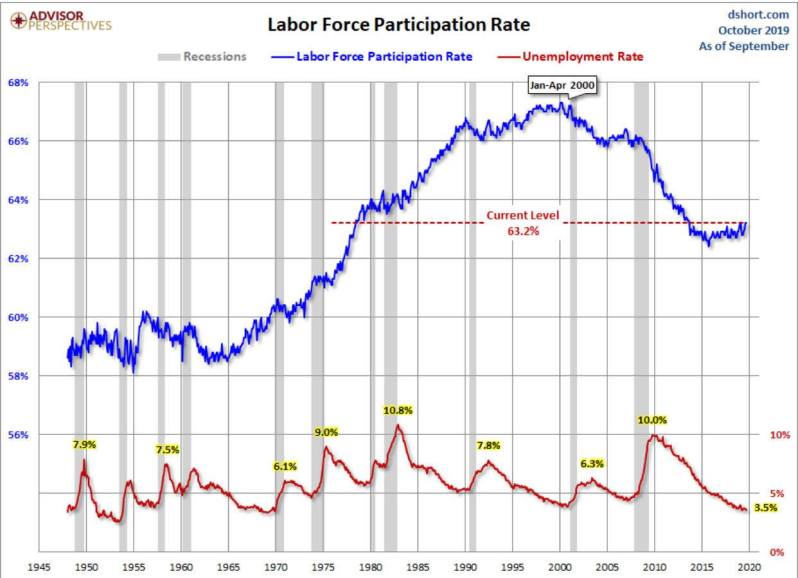 Ok, this might be a controversial viewpoint. At the end of 2017, I forecasted that yields would invert in 2018 and that once this inversion happened, it would be the longest start to the recession ever.

“I believe we will see an inversion in 2018, but it won’t mean a recession soon. It would be the longest time before the first inversion to a recession ever in history if we inverted in 2018.”

Technically only 2/5 & 3/5 inverted and the 2/10 inversion only got to a 9 basis point spread. However, my take was that we inverted the yield curve last year, and I haven’t changed my mind at all. Since that day that I believed we inverted the yield curve, we got 1 rate cut before the actual 2/10 inversion and another rate cut after and most likely a third on the way. Still, none of this warrants the R-Word yet.

Since the start of 2015, when I incorporated the bond market forecast, I have always said the same thing. The 10-year yield will stay in the range between 1.60%-3%. Since the Fed had hiked many times from zero, I had no choice but to forecast for a yield inversion, which I believe still happened last December.

Those 3 flags have been rising, now the final 3 flags left, which to me are more important than the first 3.

4. Housing Starts typically fall into a recession. This is going to be tricky, as we experience the weakest new home sales and the housing starts cycle ever recorded in U.S. history.

Now last year, the housing sector did look like it was flagging a recession.

However, those data lines have all reversed as new home sales have recovered and looking to be positive this year, which should forecast flat to positive growth in 2020.

This is very key that the monthly supply has been drawn down. Housing starts are still a negative year to date due to the oversupply of new homes created last year, but that is changing.

Even though permits really haven’t broken out above 1,400,000, it’s not going down, which means housing starts falling next year will be difficult for the bears.

Since monthly supply is down and sales are up, this leaves an excellent backdrop for housing starts to be flat and positive in 2020. Now, this does not mean housing is in nirvana, or we have a boom here. Housing bulls make the same mistake always by taking low bar housing data and extrapolating it into some new phase. All we did is take a recessionary data line off, which is vastly positive for the economy. Remember all year over year comps for housing are going to be comfortable to beat until February 2020.

5. Leading Economic Indicators Fall 4-6 straight months with no recovery during those months.

From the Conference Board
https://www.conference-board.org/data/bcicountry.cfm?cid=1

“The composite economic indexes are the key elements in an analytic system designed to signal peaks and troughs in the business cycle. The leading, coincident, and lagging economic indexes are essentially composite averages of several individual leading, coincident, or lagging indicators. They are constructed to summarize and reveal common turning point patterns in economic data in a clearer and more convincing manner than any individual component – primarily because they smooth out some of the volatility of individual components.”

The ten components of The Conference Board Leading Economic Index® for the U.S. include:

You can see below those leading economic indicators are an excellent late state confirmation that the expansion is about to end. We haven’t had too much growth action lately in this index, but it isn’t fading either. 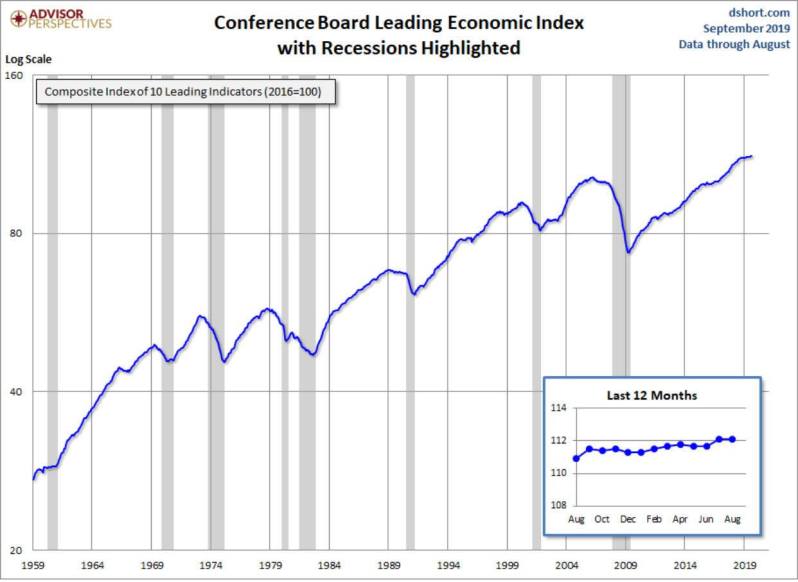 I always get the question of what did you say before the great recession. I always state,  backtest the model, take the 6 recession flags to add them all up and see what it looks like before every recession post-1960. Just to give you a flavor of 2007. Here the report from Conference board back on July 19, 2007

From The Conference Board:  https://www.conference-board.org/pdf_free/economics/bci/lei0707.pdf

6. Look for sectors that can create a supply shock that would create a noticeable rise in unemployment claims that would mean we are in a recession.

These are the sectors or storylines that I would keep an eye out on from now until the recession happens.